Our pathfinder used for circles.garden#

You can follow the first two steps in this tutorial to find the transfer steps that circles.garden would use for any hypothetical transaction of your choice.

The pathfinder is being developed here. The circles api uses a compiled binary of this. You can use this visual interface of the latest version of criseth's pathfinder to explore the circles trust network and find different transactions. This latest pathfinder works slightly differently from ours. The paths found in this interface are not necessarily the same that circles.garden would use.

An example of counting transfer steps#

Below is an example from criseth's pathfinder for transferring 1000 CRC between two users. We can see that this graph has 18 edges and the transaction thus requires 18 transfer steps.

Each transfer in a transitive transaction costs gas. Transactions made through circles.garden are paid for by the Circles Coop in Eth. In terms of CRC a small fee in circles is added for each transaction to "compensate" for this.

What this means in terms of number of transfer steps#

Because of the limitations to the gas costs we have to set a maximum limit to the number of transfer steps in a transaction. This limit is currently set to 52. Here we explain why.

Following the steps in this tutorial gas costs for a number of hypothetical transactions were estimated. The results are displayed in this figure: 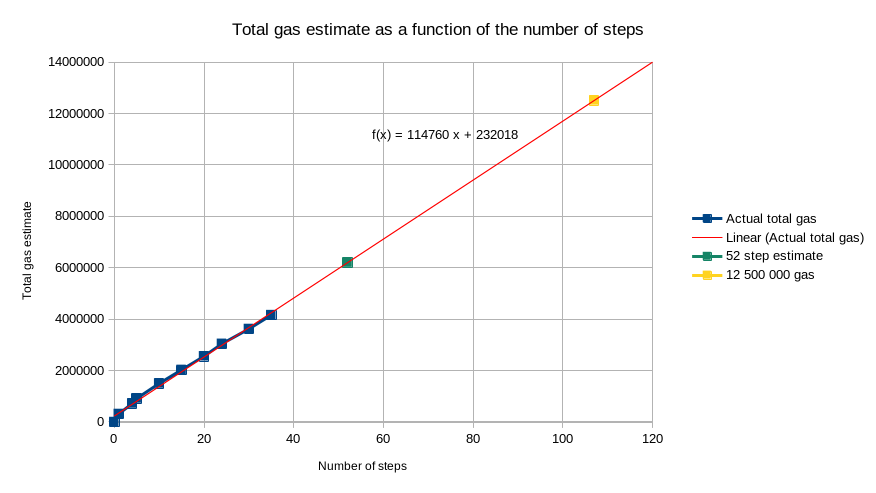 It is also worth noting that the diagram above shows the gas estimate and not the actual gas, which usually ends up being about half of the actual gas cost. This gives us some extra margin too. Below are some data points for transfers of 1 CRC. The values are taken from blockscout for transactions that were actually sent. 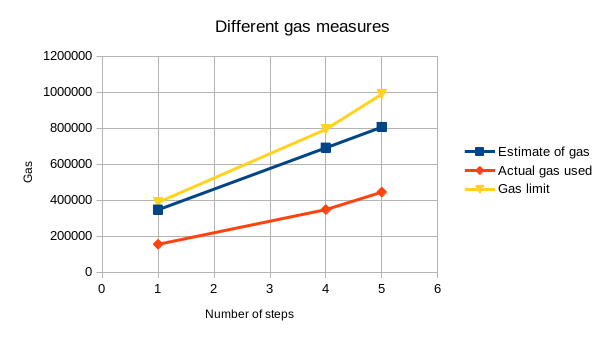 The maximum transfer step limit is defined programmatically in the circles-core.

What this means in terms of maximum transfer amount#

When transferring to a friend or a friend's friend this maximum limit is probably quite accurate because we probably won't need more than 52 steps. But what happens if the account we transfer to is a bit further away in the trust network?

The diagram below shows the number of steps needed for different amounts of CRC between the two example accounts, as calculated by the circles api (version 1.3.8). 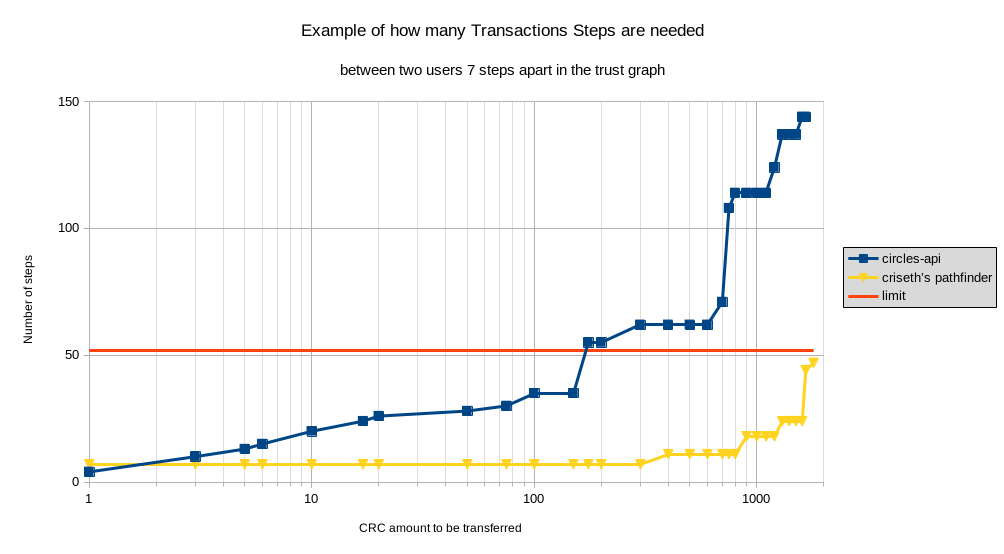 However, it doesn't have to be this bad. In the graph you can see that chriseth's pathfinder requires drastically fewer steps. In the transfer graph below you can see the different transfer steps for transferring the theoretical maximum (1700 CRC) between the two users, according to the version of chriseth's pathfinder used in the visual explorer (2021-05-14) (around 40 steps):

In conclusion, it is possible that a user might not be able to make a single transfer as large as the theoretical maximum which is suggested by the circles.garden UI. However if we would improve the pathfinder this would be far less likely to happen. It would perhaps also make sense to display the practical limit per (52 step) transaction instead of the theoretical maximum. Currently the user is told that the transaction failed due to too many hops and that they should ask the recipient to trust them directly. In the example used in this study, this happens already when attempting to transfer only 200 CRC between the two users.

We can also conclude that a step limit of 52 enables large transfers to remote accounts when using an efficient pathfinder.

Reasons for the differences between the two pathfinders#

As mentioned above, the circles api uses a compiled binary of chriseth's pathfinder. So what is the difference? First of all we are not using the latest version of chriseth's pathfinder. But more importantly the indexing of the data from the Graph is performed differently and the transfer edges data on which the pathfinder runs is therefore different. This is currently being reviewed by the Circles developer team.